Skip to content
believe virtually anything your government told you. NO hacking of elections 2016
December 30, 2016 uwantson you that you're a high tier retard
In case some of you were duped into believing this was evidence that proved Russia hacked the US elections, John McAfee would like to remind you that you’re a high tier retard and believe virtually anything your government told you. Because you do not think critically, as retards do. “if it looks like the Russians did it, then I can guarantee you it was not the Russians.”

The Joint Analysis Report from the FBI contains an appendix that lists hundreds of IP addresses that were supposedly “used by Russian civilian and military intelligence services.” While some of those IP addresses are from Russia, the majority are from all over the world, which means that the hackers constantly faked their location.

McAfee argues that the report is a “fallacy,” explaining that hackers can fake their location, their language, and any markers that could lead back to them. Any hacker who had the skills to hack into the DNC would also be able to hide their tracks, he said

“If I was the Chinese and I wanted to make it look like the Russians did it, I would use Russian language within the code, I would use Russian techniques of breaking into the organization,” McAfee said, adding that, in the end, “there simply is no way to assign a source for any attack.”

However, McAfee does see a problem with the National Security Agency (NSA) being able to listen in on every conversation and read every text message and email of every American. Rather than focusing on disrupting the bad guys in foreign countries, McAfee thinks that “all of that effort has been placed on a country that is afraid of its own citizens.”

He claims that the only way he has been able to fully block the NSA from infecting his phone with spyware is by using a flip-phone too old to be hacked. He even goes as far as to call the iPhone the “ultimate spy device.”

Since the stakes are so high, thermonuclear war and all, the least the CIA and other wonderful intelligence agencies can do is provide sufficient evidence to the American people before they get annihilated under the winds of a 10,000 degree winter breeze. Or is that too much to ask? Judging by just about everything they’ve told us over the past 15 years, I’m inclined to believe the exact opposite is true. 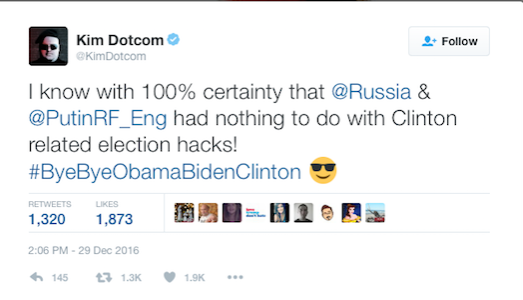 THERE WERE NO HACKED ELECTIONS. ALL THIS IS A FICTION TO GET YOU BELIEVING A LIE.