Skip to content
Uncategorized
April 26, 2020 uwantson China Floods The World With Defective Medical Supplies
Authored by Soeren Kern via The Gatestone Institute,
More than a dozen countries on four continents recently disclosed problems with Chinese-made coronavirus tests and personal protective equipment. The problems range from test kits tainted with the coronavirus to medical garments contaminated with insects. Defective Chinese face masks, purchased by Spain’s Ministry of Health, were distributed to hospitals and nursing homes across the country, and more than 100 healthcare workers who used them tested positive for Covid-19. 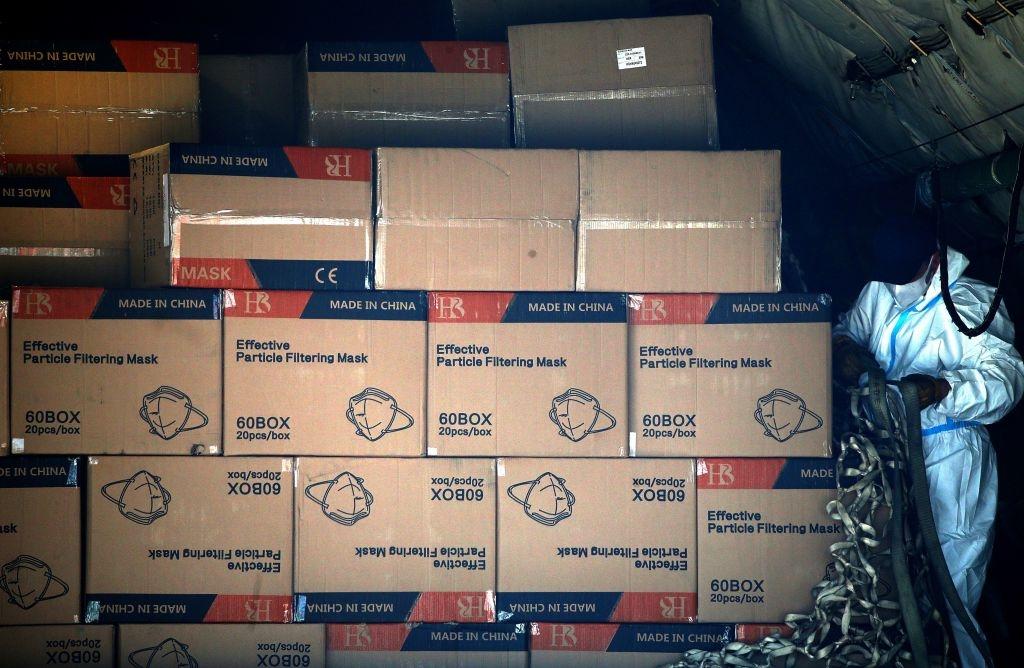 A shipment from China of 8.6 million protective face masks and 150 tons of sanitary equipment arrives at Paris-Vatry Airport in France, on April 19, 2020. (Photo by Francois Nascimbeni/AFP via Getty Images)

Gatestone Institute recently reported that millions of pieces of medical equipment purchased from China by European governments to combat the coronavirus pandemic are defective and unusable.
Since that report, more than a dozen countries on four continents have disclosed problems with Chinese-made coronavirus tests and personal protective equipment. The problems range from test kits tainted with the coronavirus to medical garments contaminated with insects.
Chinese authorities have refused to take responsibility for the defective equipment and in many instances have cast blame on the countries that purchased the material. They have also called on nations of the world to stop “politicizing” the problem — at the same time that Chinese President Xi Jinping and his Communist Party have sought to leverage the pandemic to assert a claim to global leadership.
Spain, the epicenter of the coronavirus crisis in Europe, has experienced the greatest number of problems with medical equipment purchased from China.
After the epidemic hit Spain, the Spanish government purchased medical supplies from China in the amount of €432 million ($470 million). Chinese vendors demanded they be paid up front before making any deliveries. It now appears that much of the material being supplied by China is substandard.
In late March, for instance, the Spanish Ministry of Health revealed that more than a half million coronavirus tests it had purchased from a Chinese vendor were defective. The tests, manufactured by Shenzhen Bioeasy Biotechnology, a company based in China’s Guangdong Province, had an accurate detection rate of less than 30%. Bioeasy had claimed, in writing, that its tests had an accurate detection rate of 92%.
After the swindle made international headlines, Bioeasy agreed to replace the tests. On April 21, however, the Spanish newspaper El País reported that all 640,000 replacement tests were also useless. The Spanish government is now seeking a refund.
The Chinese Embassy in Madrid blamed the Spanish government for purchasing the tests from an unauthorized vendor. Bioeasy, apparently, does not have a license to sell coronavirus tests. Spain, however, has also reported problems with material purchased from vendors that are authorized by the Chinese government.
On April 15, Spain’s Ministry of Health recalled 350,000 so-called FFP2 masks after laboratory tests determined that they were substandard. The defective masks were manufactured by Garry Galaxy Biotechnology, a company included on the Chinese government’s list of approved manufacturers of personal protective equipment. FFP2 masks are required to filter at least 94% of aerosols, but those delivered to Spain filtered only between 71% and 82% of aerosols.
The defective masks were purchased by the Spanish Ministry of Health and distributed to hospitals and nursing homes across the country. After the defective masks were recalled, more than a hundred healthcare workers who had used them tested positive for coronavirus disease (Covid-19).
In the northeastern Spanish region of Catalonia, local health officials on April 18 recalled 180,000 Covid-19 antibody tests — also known as serological tests — because of their low rate of detection. The tests, produced by the Chinese manufacturer Guangzhou Wondfo Biotech, were purchased by the central government in Madrid and distributed to regional health authorities to detect Covid-19 in two priority groups: healthcare personnel and elderly people in nursing homes. The Wondfo tests reportedly gave negative results to people who had previously tested positive for Covid-19, and also failed to distinguish between two types of antibodies, including those that confer immunity.
In the eastern city of Alicante, the General Hospital recalled 640 disposable medical garments after one of the boxes from China contained cockroaches. The hospital said that it had received a total of 3,000 garments in 75 boxes and that it found two insects inside one of the boxes. It added that given the shortage of medical supplies, the garments would be sterilized, not destroyed.
Other countries — in Europe and beyond — have also criticized the quality of Chinese medical supplies:

NEVER MISS THE NEWS THAT MATTERS MOST

ZEROHEDGE DIRECTLY TO YOUR INBOX
Receive a daily recap featuring a curated list of must-read stories.

On March 30, China urged European countries not to “politicize” concerns about the quality of medical supplies from China. “Problems should be properly solved based on facts, not political interpretations,” Foreign Ministry spokeswoman Hua Chunying said.
On April 1, the Chinese government reversed course and announced that it was increasing its oversight of exports of coronavirus test kits made in China. Chinese exporters of coronavirus tests must now obtain a certificate from the National Medical Products Administration (NMPA) in order to be cleared by China’s customs agency.
On April 16, the Wall Street Journal reported that millions of pieces of medical equipment destined for the United States were being held in warehouses in China due to the new export restrictions imposed by the Chinese government. “We appreciate the efforts to ensure quality control,” the U.S. State Department said. “But we do not want this to serve as an obstacle for the timely export of important supplies.”
U.S. Senator Kelly Loeffler from Georgia accused China of holding up shipments of test kits: “Testing is core to opening our country back up. I’m concerned that China’s holding up test kits. They’re playing games with trade policy to prevent us, the United States, from getting the testing that we need.”
The coronavirus pandemic has exposed the flaws of globalization by laying bare how the West has allowed itself to become dangerously dependent on Communist China for the supply of essential health care and medical products.
Andrew Michta, Dean of the College of International and Security Studies at the George C. Marshall European Center for Security Studies, explained:

“The Wuhan Virus and the attendant misery that the Chinese communist state has unleashed upon the world (very much including its own people) has laid bare a core structural flaw in the assumptions underpinning globalization. It turns out that the radical interweaving of markets — which was supposed to lead to the ‘complex interdependence’ that international relations theorists have been predicting for the better part of the century would lead to an increase in global stability… has instead created an inherently fragile and teetering structure that is exacerbating uncertainty in a time of crisis….
“If there is any good to come from the devastating impact on our nation of this pandemic brought about by the Chinese communist regime through its malice and incompetence, it will be the likely demise of enthusiasm for globalization as we know it across the West. After three decades of intellectual gymnastics aimed at convincing Americans that the off-shoring of manufacturing and the attendant de-industrialization of the country are good for us, the time has come for a reckoning.
“Since the end of the Cold War, Western elites seem to have been in thrall to the idea that various ‘natural forces’ in the economy and politics were propelling us forward to a digitally interconnected brave new world, one in which traditional considerations of national interest, national economic policy, national security, and national culture would soon be eclipsed by an emergent peaceful global reality. This virus crisis is a wake-up call, and while some argue we are waking up too late to effectively counter current trends, my money is on the ability of the American people to rally in a crisis and on the resilience of Western democratic institutions.
“Today, while battling the Wuhan Virus consumes the attention of our government agencies and health care systems, we should not lose sight of the foundational strategic challenge confronting the West in the emerging post-globalization era: We are in a long twilight competition with the Chinese communist regime, a struggle we cannot escape, whether we like it or not. Now is the time to wake up, develop a new strategy for victory, and to move forward.”