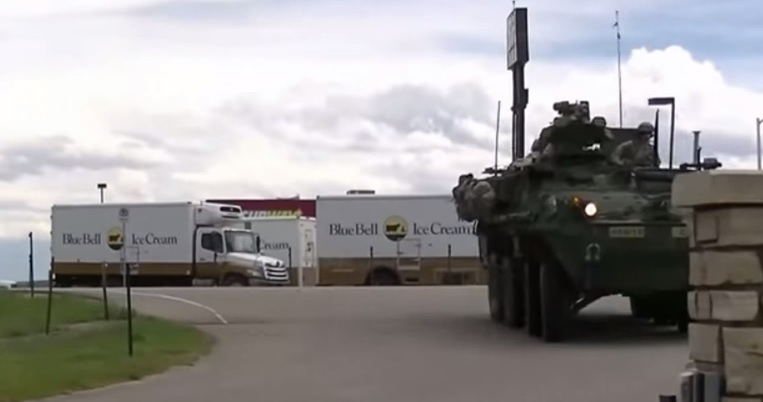 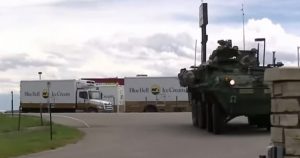 However, the videos below from  DAHBOO777 and the Fugazi Report have COMPLETELY DESTROYED any credibility Blue Bell had remaining as ONCE AGAIN, we see Blue Bell Ice Cream trucks involved in the “Raider Focus” war games in Colorado, more proof that corporate America is lying to the American citizens as the United States Military prepares for SOMETHING HUGE in this country and as the 2nd video below clearly shows, whatever it is they are preparing for is MASSIVE as massive amounts of military hardware (and Blue Bell Ice Cream trucks) are seen on the streets of America. Additionally, we now have confirmation from a United States military representative that Jade Helm 15 is about the infiltration of America as shared below.

Why Blue Bell (979-836-7977) would destroy their own credibility by lying when they could have easily told the truth is beyond our comprehension here at ANP and the mere fact that Blue Bell issued an official statement, a statement that has been proven as being mere propaganda, should tell everyone that something is terribly wrong here….why would Blue Bell Ice Cream issue an official statement that has been proven to be a lie and what is the real purpose of these trucks that are taking part in this exercise?

This is also more proof that since, officially, we are being told that Jade Helm are just ‘exercises to prepare troops for overseas duty’ while each and every day we are learning something different, should be enough to have every concerned American calling their Congressional Representatives and the White House at 202-456-1111 and DEMANDING answers. Sadly, our representatives in Washington DC have FORGOTTEN that they are MERELY SERVANTS to the American people, not dictators.
Aaron Wilson PhD recently had the opportunity to interview LTC Mark Lastoria of the US Military about Jade Helm 15 and what Lastoria told Wilson should end any talk about Jade Helm 15 being for overseas duty. Read this question and statement about Jade Helm by Lastoria carefully and then, lets have the United States military tell us that these ‘drills’ are about preparation for overseas duty. This statement clearly proves that Jade Helm is about the US military infiltrating America.:

Q. What is this “blending in” that you talked about in Bastrop (Texas)?
A. We want to get the Midwest mindset going, it is an adaptive technique, a subtly we need to master, quite different than Atlantic Coast style. (Which they have apparently already ‘mastered’.)
In the 3rd video below from ANP friend American Contractor we learn more about the military rules and directives of Jade Helm 15 including the fact that they will be using live sniper fire and explosives and that the federal and local government and law enforcement are heavily involved in these ‘exercises’.:

Coordination with civilian officials
Local and federal law enforcement agencies will be consulted. 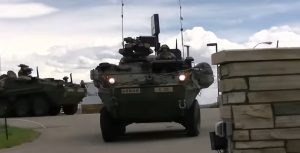 An ANP reader sent us the picture below out of Yuma, Arizona. Does America REALLY need this kind of hardware on American streets? This clearly looks like something we’d see in a 3rd world nation at war rather than a ‘free’ country. 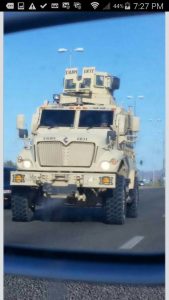