Skip to content
Uncategorized
June 11, 2020 uwantson Refusing To Exempt Black Students From Final Exam
I heard of this from my sons, when in college. Black kids didn’t have to take mid terms or finals, and even if dumb as a post and never showed up for class, they always got As. Which means they were all getting degrees and instant jobs once they graduated.

Authored by Jonathan Turley,
Gordon Klein, an accounting professor in the Anderson School of Business has taught at University of California Los Angeles (UCLA) for almost 40 years.
He is now suspended and under police protection in his home.
The reason?

Klein refused to exempt black students from his final exam and sent a pointed rebuttal to students asking for the “no harm” exam. Parts of the response was certainly mocking in tone, more so than I would have considered appropriate.  The school has launched a formal discrimination investigation.
However, the suspension, investigation, and death threats against Klein reinforce the fear of many in the academy of a rising orthodoxy on campus and a lack of support for faculty involved in controversies.
According to Inside Higher Ed, a group of students asked Klein for a “no-harm” final exam that could only benefit students’ grades as well as shortened exams and extended deadlines.  They cited recent “traumas, we have been placed in a position where we much choose between actively supporting our black classmates or focusing on finishing up our spring quarter . . . We believe that remaining neutral in times of injustice brings power to the oppressor and therefore staying silent is not an option.”  They specifically noted that this was not “a joint effort to get finals canceled for non-black students”  “but rather an ask that you exercise compassion and leniency with black students in our major.”
Klein wrote back to one student that he was being asked to make a distinction that he could not possibly make. This is the entirety of the message:

Thanks for your suggestion in your email below that I give black students special treatment, given the tragedy in Minnesota.
Do you know the names of the classmates that are black? How can I identify them since we’ve been having online classes only? Are there any students that may be of mixed parentage, such as half black-half Asian? What do you suggest I do with respect to them? A full concession or just half? Also, do you have any idea if any students are from Minneapolis?
I assume that they probably are especially devastated as well.
I am thinking that a white student from there might be possibly even more devastated by this, especially because some might think that they’re racist even if they are not.
My TA is from Minneapolis, so if you don’t know, I can probably ask her. Can you guide me on how you think I should achieve a “no-harm” outcome since our sole course grade is from a final exam only? One last thing strikes me:
Remember that MLK famously said that people should not be evaluated based on the “color of their skin.” Do you think that your request would run afoul of MLK’s admonition?
Thanks, G. Klein

The controversy led to immediate demands for the professor to be fired.
Thousands have signed a petition that declares Klein must be fired for his “extremely insensitive, dismissive, and woefully racist response” and “blatant lack of empathy and unwillingness to accommodate his students.” 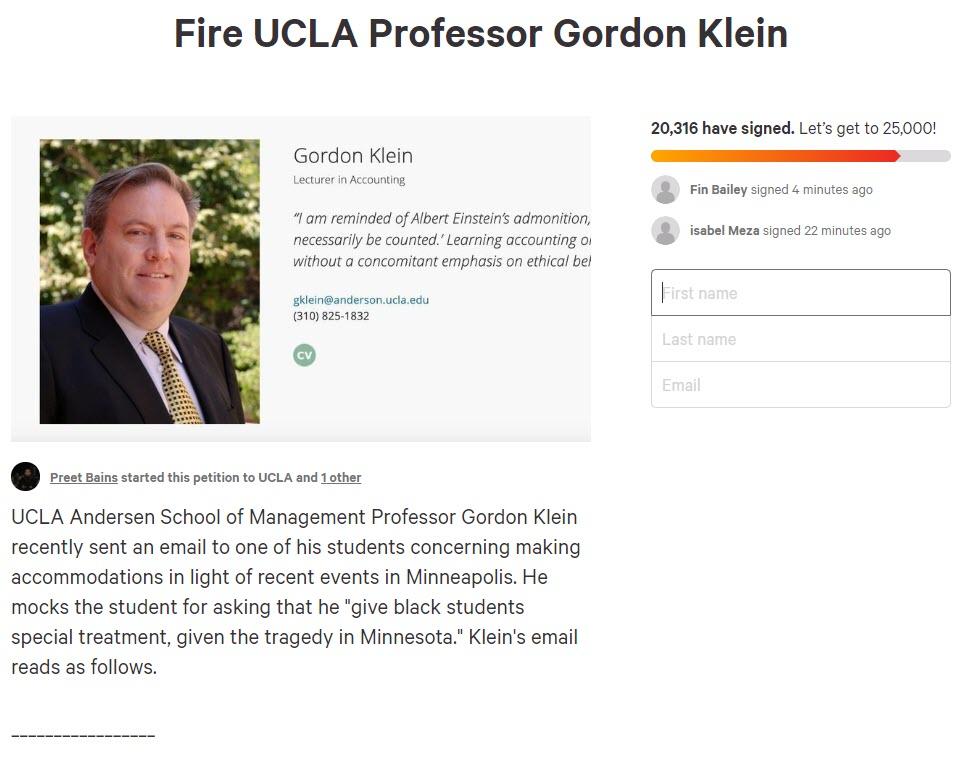 UCLA has launched an investigation that could lead to such termination and issued a statement that “We apologize to the student who received it and to all those who have been as upset and offended by it as we are ourselves.”
It has also agreed to extend all exams, presumably for all students.  I think that the extension of the time was a good idea for the school as a whole and I can certainly understand the school objecting to the tone of the response at a time of great unrest and trauma in our society.  However, the email was a poorly crafted effort by Klein to object to what he viewed as an unworkable, race-based system of accommodation.  One can certainly disagree with those objections, but the principle of academic freedom is to allow such views to be stated without fear of termination.
UCLA is also dealing with another demand for termination after Political science lecturer W. Ajax Peris, read aloud MLK’s “Letter from Birmingham Jail,” which includes the n-word. He also showed a documentary to the class in which lynching was discussed.  This might have been inappropriate in Klein’s accounting case but Peris was teaching the history of racism.  Students demanded that he stop the discussion but he apologized for any discomfort and continued his lecture.
The Political Science Department condemned Peris and  referred Peris to UCLA’s Discrimination Prevention Office for an investigation. UCLA will host a town hall for students in Peris’ classes to discuss the “controversy.” While Peris has apologized in a writing and video, students are demanding his firing.
Such actions are applauded by many faculty who have supported the increasing limits on free speech and academic freedom on campus. There has been a startling erosion of such protections for those with opposing views at universities and colleges.  Many faculty are intimidated by the response in these controversies and fear that supporting academic freedom or free speech will result in their being labeled racist or lacking of empathy. In three decades of teaching, I have never seen the level of intolerance for free speech that we are seeing across the country.  As I noted, there are valid objections to raise in these incidents, but the response of universities is clearly designed to send a message to other academics that they cannot expect the protections of the universities in such controversies.