But every single Trump event has hundreds and thousands of militant, angry, violent, and VERY VICIOUS CLINTON THUGS who attack and spit on, and physically assault people who show up to hear Trump speak. They also commit voter fraud and have been caught doing so.

But not Trump supporters.

And this is the new left. This is the SJW group of Nazis.

And, it looks like these maniacal thugs are about to get their witch in the White House and GOD HELP  US ALL.

The devil’s minions are loose on the streets of America and the police aren’t doing a thing about it.

The meme that somehow Trump’s supporters are not just armed but prone to violence is one of those ideas that, if explored with even a small corner of the cranium, would be revealed as utter nonsense.
For starters, you might wish to revisit press coverage of the events hosted by Trump vs. Mrs. Clinton during their respective campaigns.
As far as I can tell, there was not a single case of Trump supporters circling Clinton events like feral dogs in order to harass her supporters as they tried to enter or leave the venues where the events were being held.
Yes, there were a couple of isolated incidents where Trump supporters were overly enthusiastic in assisting security as they subdued protesters inside Trump events, and those were shameful.
But that was nothing compared to the violence committed against participants at Trump rallies in cities such as San Jose, Richmond, Chicago, and Pittsburgh. 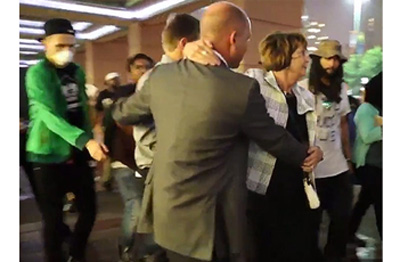 The latest such incident occurred this past week in Minneapolis where a pack of cowards, unhindered by police, took turns sucker punching and robbing people trying to enter a Trump event.
It is equally disturbing when individuals are being targeted simply because they display symbols indicating they are pro-Trump.
The always erudite John Derbyshire recently asked whether Clinton supporters would be concerned for their personal safety as a consequence of placing a pro-Clinton placard on their lawn?
Of course not.
But what about a Trump supporter?
The answer is completely obvious in the affirmative.
If you accept the populist narrative, to plant a Trump sign in front of your home is the same as announcing to the world you’re a crazy white racist.
For certain demographics—in which I include brainwashed young white hipsters—that makes you and yours fair game.
At this point, there are too many examples of violence against Trump supporters to recount here, but I’ll toss into the ring a 62-year-old man beaten with a crowbar for wearing a Trump T-shirt, and a recent assault against Trump supporters in West Hollywood. If you read that article, you’ll note that prior to the attack, the Trumpsters were refused service and asked to leave a restaurant solely because of their political affiliation.
Oh, the irony of watching people who profess to worry about Trump being a fascist… trying to silence him and his followers. You know, because the defense of free speech extends only to their free speech.
Want to debate the Second Amendment, trade policies, the legal process for orderly immigration, the size of government, monetary policy? Pull a Trump T-shirt over your head, and all bets are off. It’s like waving a red cape in front of a herd of bulls.
Of course, it’s not all that one-sided. The odds of a dedicated Trump supporter listening with an open mind to someone making a case for electing Hillary are roughly equal to those of Bill Clinton taking a pass on an attractive and willing intern.
But based on the evidence, acts of violence toward those expressing an opposing view—in this case, pro-Trump—appear to come almost exclusively from the left.
This is only conjecture, but if you polled a wide swath of Clinton supporters as to whether they thought it a good thing if Trump were to die on the spot, I suspect the majority would answer solidly in the affirmative.
Okay, okay. I guess a similar poll directed at Trump’s supporters and having to do with Hillary Clinton’s immediate demise would probably have the same results.
Face it, the nation is divided, and dangerously so.
But as to who is more likely to actually open fire, you’ve got to place your bet on the anti-Trump crowd.

In researching the violence and threats of violence against Trump supporters, I googled “Trump Supporters Attacked.” What I got was a page of listings about Trump verbally attacking someone or another.
I finally had to go to the far less rigged DuckDuckGo.com search engine in order to find a report, by Breitbart – the only semi-major media outlet actually reporting on this stuff – about the latest attacks in Minneapolis.
Do you remember the overenthusiastic Trump supporter who helped subdue a protester at one of his events by sucker-punching the man as security was taking him out of the venue?
The reason you probably do is that it was all over the news for the better part of a week.
Yet the latest attacks in Minneapolis were buried in the equivalent of the back pages, in small print, by the big search engines and mainstream media.
Now, imagine if it were the other way around… that a group of Trump supporters blocked the doors of a Hillary event and made the participants run a gauntlet of fists and spit.
This new reality of the media and Google (among others) acting as unindicted co-conspirators for the takeover of the American government is highly disturbing.
Their manipulation of the news is so aggressive and so overt (as well as covert) in this election that I suspect this era will be looked back on in history as an inflection point signaling the end of democracy as we know it. That is, if history won’t likewise have been rewritten by the mega-manipulators.
It’s clear the media is determined to deny Trump a fair shot at winning the election, but this continued pounding of the drums about violence could turn into a self-fulfilling prophecy. In which case, everyone loses.
Frankly, I’m appalled at what’s going on in this country. Which is why some years ago I voted with my feet, a decision I have never regretted, not for a minute.

If you’d like to experience what life is like on the other side of the curtain, consider attending the upcoming Discover Cafayate event hosted by Doug Casey here in the quaint wine-growing Argentine valley where we live. The dates are November 1–6, and there is a limit to the number of guests who can participate.

If you’re interested, drop my friend Juan Larranaga a note at live@laest.com.

Save the Planet, Take Over the Economy! Another recent example of the socialist mindset is provided in a New Republic article by Bruce McKibben, a true believer of the most dangerous sort.
In his article entitled, “A World at War,” he calls for a takeover of the American industry and property by the government, similar to that in WWII, but in this case in order to fight the war against weather.
Here’s a telling quote:

Mark Wilson, a historian at the University of North Carolina at Charlotte, has just finished a decade-long study of the mobilization effort, entitled Destructive Creation. It details how the federal government birthed a welter of new agencies with names like the War Production Board and the Defense Plant Corporation; the latter, between 1940 and 1945, spent $9 billion on 2,300 projects in 46 states, building factories it then leased to private industry. By war’s end, the government had a dominant position in everything from aircraft manufacturing to synthetic rubber production.

“It was public capital that built most of the stuff, not Wall Street,” says Wilson. “And at the top level of logistics and supply-chain management, the military was the boss. They placed the contracts, they moved the stuff around.” The feds acted aggressively—they would cancel contracts as war needs changed, tossing factories full of people abruptly out of work. If firms refused to take direction, FDR ordered many of them seized. Though companies made money, there was little in the way of profiteering—bad memories from World War I, Wilson says, led to “robust profit controls,” which were mostly accepted by America’s industrial tycoons.

Remarkably, McKibben and a number of similarly dangerous socialists are thought-leaders for millions of Americans. As the useful idiots increasingly take the reins of political power, could we see this enviro-fascism lead to calls for arresting climate-change skeptics? You betcha.