Thousands are dying daily in China.
Footage represents one district, in parts, in one province.  In China,
the word on the street is that each Province is giving up about 30,000
dead per day and that number is from January 27th, 2020.

This is a bio-weapon. We are being lied to.

When it lands
here, and IT ALREADY HAS, and you get it, you will not see the sunset
the same day. It is a SAME DAY KILLER. Shortness of breath in the
morning, dead by evening.

All victims have one report only. It is this.

Shortness of breath, then loss of consciousness. They never saw the sunset from them on.

Thousands of
vans go up and down streets collecting bodies to keep them from piling
up, etc. That’s about all they can do. Everything they try to help the
patient does not work. Any videos of patients walking out of hospitals
cheering happily ARE STAGED. Be advised.

Minimize your
contact with strangers. Get a surgical mask NOW, not LATER, if you must
go out. This is an airborne disease. Get focused. Make a food run etc of
what you need for the next week and get it done NOW, not LATER. It is
believed the chemtrail planes are the vectors of this weapon.

You know me. I
don’t do the fear thing, never have. But I’ve seen too much smuggled
footage from China to hold back any longer, now that they are admitting
that it is in LA, Chicago, San Diego, and a few other cities. If true,
then those people are already dead. And the media is acting like its no
big deal, go back to sleep.

They ARE NOT SLEEPING IN CHINA. Everything has come to a complete stop, commerce wise. Everything.

Keep your
immune system popping. Sunlight for Vitamin D, colloidal supplements for
vitamins and minerals, and real juices from real plants and vegetables.
Those are your only defense, because the mechanism this weapon is
deployed through is THE COMMON COLD.

Here is a video – while it lasts – on bitchute. 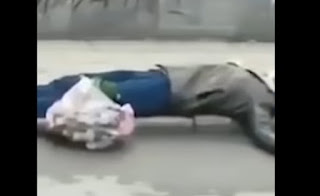