Skip to content
Tesla Stops Cooperating With NTSB Probe Into Fatal Crash
April 12, 2018 uwantson
Big Surprise…not
Tesla has repeatedly infuriated investigators at the National Transportation Safety Board by announcing its Autopilot software was not to blame for a deadly and gruesome crash in Mountain View last month – despite the official probe not being over yet – and the government agency has finally had enough… as has Tesla: on Thursday, Tesla said it would withdraw from the NTSB’s investigation and cease cooperating with investigators.

Bloomberg described this as “an unusual move” because, typically, when your company has nothing to hide, there’s little reason to, well, cease cooperating with investigators: we can only imagine Elon Musk would have fired Mueller long ago if he were president. Still, though it won’t have a formal role in the probe, Tesla will still provide “assistance” to the NTSB.
In justifying its decision, Tesla made an unusual argument: That it would withdraw from the probe in the interest of transparency because the NTSB has repeatedly stopped it from releasing information about autopilot, something that Tesla says violates its “commitment” to transparency.

“Tesla withdrew from the party agreement with the NTSB because it requires that we not release information about Autopilot to the public, a requirement which we believe fundamentally affects public safety negatively,” the company said in an emailed statement. “We believe in transparency, so an agreement that prevents public release of information for over a year is unacceptable.”

For what it’s worth, the NTSB says it kicked Tesla off the probe for hiding evidence and lying to investigators – an action that wouldn’t be altogether unprecedented. 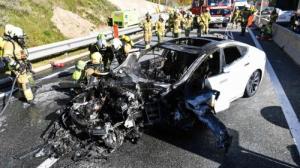 Tesla angered the NTSB earlier this week when it released a statement saying the “only” explanation for the crash was that Walter Huang, the 38-year-old who died during the accident, was not paying attention. Before that, Tesla said in a blog post that the driver’s hands weren’t on the steering wheel for six seconds leading up to the crash.

As Bloomberg points out, because it’s a relatively small agency, the NTSB relies on the cooperation of companies like Tesla to assist in its probes.

While the NTSB has no regulatory powers, it makes safety-related recommendations to both the government and transportation companies. Meanwhile, the National Highway Traffic Safety Administration does have the power to order recalls and fine manufacturers; it also investigated the 2016 Tesla crash and closed its probe in January 2017, saying it didn’t find a defect.

With Musk trying to pivot focus back to the company’s long climb out of “production hell” – and his recent announcement that production of the next Tesla Model would begin late next year – will markets once again go along with it?

Judging by today’s action in Tesla shares, it doesn’t look like it.