People with guns are checking the identification of individuals trying to enter an area in Seattle run by far-left activists and groups like Antifa, the Seattle Police Department said.

“We have been hearing from community members that they have been subjected to barricades set up by the protesters, with some armed individuals running them as checkpoints into the neighborhood,” Assistant Chief Deanna Nollette told reporters on Wednesday.

“While they have a constitutionally protected right to bear arms, and while Washington is an open carry state, there is no legal right for those arms to be used to intimidate community members,” she added.

Businesses and citizens being asked to pay a fee to operate in the area, which is known as the Capitol Hill Autonomous Zone and includes about 500 houses. That would be the crime of extortion, Nollette said.

Antifa now seeking armed volunteers to hold the autonomous region, to take the heat of themselves when someone inevitably gets killed by joggers. 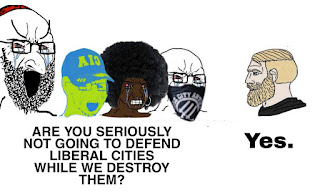 could we get some anons to actually watch these streams and pick out some spicy content or do some video editing there’s a lot in here :

here’s the original incident of him assaulting the graffiti tagger and then psychologically manipulating the guy into accepting his authority:
https://gofile.io/d/IffAr1

Him patrolling doing security open carrying an AK with his goons :

Seattle’s new “autonomous zone” – a six-block area established by protesters after the police and National Guard pulled out of city’s Capitol Hill neighborhood – now has a ‘heavily-armed’ warlord, and he’s already enforcing his streets.

Soundcloud rapper Raz Simone and his entourage have claimed the Capitol Hill Autonomous Zone (CHAZ) as their territory – and have already been filmed regulating when a man wouldn’t stop spraying graffiti over an urban art installation, telling him “We are the police of this community now!”

The Capital Hill Autonomous Zone, world’s most ambitious anthropological experiment, has received its first warlord. Took only one day for the “monopoly on violence” to be discovered… what will happen next? pic.twitter.com/eFWlQPSumd

Raz and crew assaulted someone on FB live. pic.twitter.com/MgipRRrWiF

A SoundCloud rapper becoming the warlord in an Antifa insurgency-controlled autonomous zone in Seattle is proof we live in a simulation. pic.twitter.com/E15y65kj7K

Meanwhile, homeless people who were invited to CHAZ stole all of their food. Antifa are calling for vegan supplies…

“That’s news to me”. pic.twitter.com/L3LT86Zxgq

So, the governor of Washington doesn’t know that a six-block area, in the largest city in his state, was seized by Antifa and other activists after driving the police and National Guard out following a violent confrontation Sunday night.

LOL! “I don’t recall”, “not in my purview”, and now…”that’s news to me” —works every time if you’re a Democrat. #SeattleAutonomousZone pic.twitter.com/Phfuiw8GLr

Simone has called for the long-term occupation of the area, tweeting: ‘Come out now & hold it down.’
‘We’ll be here as long as it takes so bring a tent and a blanket,’ he added.
It followed astonishing developments in Seattle, where protesters have established what they call the ‘Capitol Hill Autonomous Zone,’ or CHAZ, setting up barricades and armed checkpoints and declaring that police are not allowed inside the zone.
The zone, which includes apartment buildings and businesses, also contains the Seattle Police Department’s East Precinct, which cops abandoned on Monday after receiving a threat that the station would be overrun and burned down. A defaced sign outside the precinct now reads ‘Seattle People Department’. –Daily Mail

On Wednesday, President Trump demanded that Seattle city officials regain control of CHAZ – to which Simone tweeted on Thursday: “The President really put a hit on my head,” adding “I’m not a Terrorist Warlord. Quit spreading that false narrative. The world has NEVER been ready for a strong black man.”

The President really put a hit on my head. I’m not a Terrorist Warlord. Quit spreading that false narrative. The world has NEVER been ready for a strong black man. We have been peaceful and nothing else. If I die don’t let it be in vain. pic.twitter.com/HSEs5C2QRv

Perhaps Raz should stick to Soundcloud…