Skip to content
CIA assets are cunts CNN ABC attack Trump constantly and openly endorse his assassination
January 29, 2017 uwantson
Scores of irate liberals organized in part by CAIR (considered a terrorist organization in the UAE), descended upon airports around the country on Saturday to protest Donald Trump’s 120 day ban on refugees from 6 “nations of concern” and a permanent ban on Syrians until further notice. Of note, the countries on the list were originally identified under Obama by the Department of Homeland Security in the “Terrorist Travel Prevention Act of 2015.”
As a result of the Executive Order, several travelers from the newly restricted nations found themselves in limbo at airports across the United States, as many were kept off flights or stranded. In response, Democrat congressional representatives Nydia Velazquez and Jerry Nadler showed up to JFK airport with the press to earn a few votes for the next election.

Standing at JFK to fight for the legal rights of refugees being detained under Trump’s order & attack on American values. We will #resist pic.twitter.com/tCizDYJWjO

The Puerto Rican born Velazquez (who’s been in US Politics over 35 years and hasn’t bothered to master English), took to the cameras to decry the Executive Order for not offering guidelines. Oh, and it’s unjust.

Rep. @NydiaVelazquez at JFK Airport: “Mr. President, look at us. This is America. What you have done is shameful.” https://t.co/o9ZkNFkI5Z pic.twitter.com/CvgJMDd5kP

One of the stranded travelers was Iraqi interpreter Hameed Khalid Darweesh, released from detention after 18 hours. Reps. Velazquez and Nadler were quick to cozy up to Darweesh, hoping to milk the “human element” of this tragic story of injustice.

One of the refugees, Hameed Khalid Darweesh, has been released pic.twitter.com/U1XHr4DaTt

About an hour later, Darweesh was wheeled in front of network cameras where he was asked what he thought of Donald Trump: 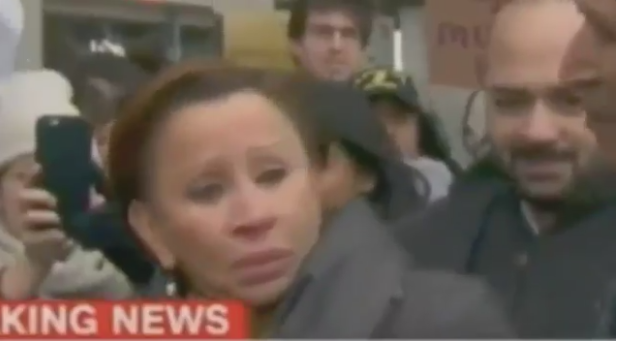 Hameed Darweesh speaks after being released from detention at JFK airport in wake of immigration order: “America is the land of freedom.” pic.twitter.com/2NfkWSEhxN

Unfortunately for Rep. Velazquez, Hameed Khalid Darweesh didn’t fit the bleeding heart narrative. Fortunately for the rest of the stranded travelers, and putting an end to this orchestrated CAIRport protest, a NY Federal judge granted a temporary repreive following an ACLU request for a temporary stay allowing detained travelers to stay in the United States.