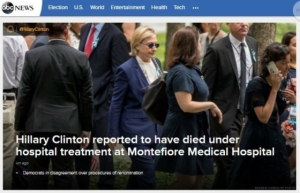 Former Haitian President of Senate is speaking out to tell the truth about Clinton Foundation at a Trump event! The former president said that Clinton was trying to buy him. She tried to appeal to him (bribe him).
She defrauded the people of Haiti…

“I spent 4 hours with Bill Richardson to tell Bill Clinton not to invade Haiti.

A week later the embassy called me and told me that Bill Clinton has a messenger for him.

He came and told me to sign with Bill Clinton, join his movement and Clinton will make me the richest man in Haiti.

He just challenged Trump to ask Hillary Clinton to publish the audit of all the money they have stolen from Haiti in 2010.
h/t Jim Quinn ‘s The Burning Platform blog,