Skip to content
Google Chrome Listening In To Your Room
November 22, 2016 uwantson

Yesterday, news broke that Google has been stealth downloading audio listeners onto every computer that runs Chrome, and transmits audio data back to Google. Effectively, this means that Google had taken itself the right to listen to every conversation in every room that runs Chrome somewhere, without any kind of consent from the people eavesdropped on. In official statements, Google shrugged off the practice with what amounts to “we can do that”.
It looked like just another bug report. “When I start Chromium, it downloads something.” Followed by strange status information that notably included the lines “Microphone: Yes” and “Audio Capture Allowed: Yes”. 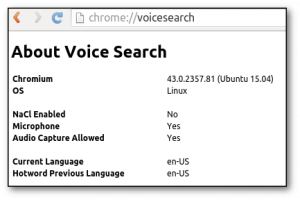