The last report issued in 2013 by the Department of Justice (Vaccine Court), for compensation made by the Health and Human Services for people injured or killed by vaccines, was released in December 2013, covering the period of 8/16/2013 through 11/15/2013. The report is available as a Power Point presentation here.
There were 139 claims settled during this time period, with 70 of them being compensated. So, just over 50% of the claims filed for vaccine damages were compensated during this period.
Once again, the greatest percentage of damages compensated were for the influenza vaccine, and most of those were for Guillain-Barré Syndrome (GBS). Yet these facts, tucked away in a file on the Department of Health and Human Services website, are never reported in the mainstream media. So we will report them here. You can also read the report yourself in the Power Point file here.
Of the 70 cases compensated, 42 of them were for the flu vaccine, or 60% of the cases settled where compensation was awarded for injury or death due to the vaccine. The combined total of the other 40% of cases settled included the following vaccines: Hep B, Tetanus, HPV, DTaP, MMR, IPV, PCV, Hib, Meningococcal, Varicella, TD. 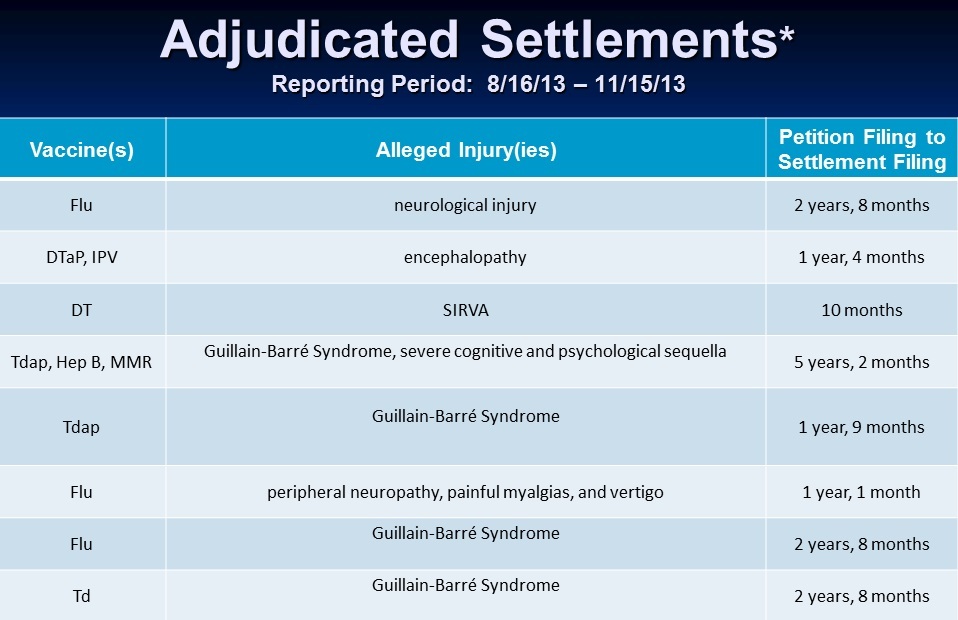 So injuries and deaths due to the flu vaccine were compensated more than the total compensation paid out to eleven other vaccines. Yet, if you look at the top selling vaccines in the market, the top flu vaccine is only #5, being outsold by Prevnar, Gardasil, PENTAct-HIB, and Infanrix/Pediarix. (Source.)
When you receive your “routine” annual flu shot, are you aware of these statistics?
And this is just for a 3 month period during 2013. When we published the last report back in 2013, for the period covered between 5/16/2013 to 8/15/2013, the numbers were very similar: 77 cases settled for compensation resulting in injury or death due to vaccines, and 50 of those were for the flu vaccine (report here).
Clearly, the flu vaccine is the most dangerous vaccine in America today, but that fact is not mentioned by the mainstream media, nor is it likely to be reported to you by your doctor.
These cases are the ones that were compensated for injuries and deaths due to vaccines, which are only about 50% of the claims filed. The other 50% of vaccine injuries or deaths filed received nothing, because their attorneys were not able to defeat the government attorneys (funded through your tax dollars) fighting to not pay for damages. But even these claims that are filed are admittedly under-reported.
Attorney Howard Gold of Gold Law Firm, who settled a case for GBS due to a flu vaccine in 2011, remarked:
Petitioners have three (3) years from the onset of the injury (or two years from date of death) to file a claim. Gold states that the “Program is not used as much as it could be because the American public is just not aware of it. I receive at least 5 calls a month from individuals who cannot obtain compensation because the deadline has passed. They just found out about it too late. We all need to do a better job in getting the word out to the public that the Program exists.” (Source.)
In November 2013, a healthy 19-year old young man died from a routine exam that included the flu vaccine. Chandler Webb received the flu shot on October 15th, and then died on November 19th, 28 days later. Since the flu shot is considered safe in the medical field, doctors waited too long to suspect that the flu shot was causing Chandler’s rapidly deteriorating medical condition, according to his mother. She believes that if they had investigated the adverse reaction to the flu shot immediately, he might still be alive today. You can watch the interview here:
As can be seen by the cases compensated by the vaccine court for injuries and deaths due to the flu vaccine, the majority of them are for Guillain-Barré Syndrome.
What is Guillain-Barré Syndrome? Here is the definition the CDC gives:
Guillain-Barré syndrome (GBS) is a rare disorder in which a person’s own immune system damages their nerve cells, causing muscle weakness and sometimes paralysis. GBS can cause symptoms that last for a few weeks. Most people recover fully from GBS, but some people have permanent nerve damage. In very rare cases, people have died of GBS, usually from difficulty breathing.
Compare this to the CDC definition for Polio:
Polio is an infectious disease caused by a virus that lives in the throat and intestinal tract. Up to about 72% of susceptible persons infected with polio have no symptoms. However, infected persons without symptoms can still spread the virus and cause others to develop polio. About 24% of infected susceptible persons have minor symptoms such as fever, sore throat, upset stomach, or flu-like symptoms and have no paralysis or other serious symptoms. About 1-5% develop aseptic meningitis with stiffness of the back, back, or legs, and in some persons increased or abnormal sensations a few days after the minor illness resolves. These symptoms typically last from two to ten days, followed by complete recovery. Less than 1% of polio cases result in paralysis of the limbs (usually the legs). Of those cases resulting in paralysis, 5-10% of the patients die when the respiratory muscles are paralyzed.
Of course, the medical community and the mainstream media want everyone to believe that polio was eradicated by vaccines a long time ago. Read Dr. Suzanne Humphries’ excellent article, Did Vaccines Really Eradicate Polio?, as well as Dr . Viera  Scheibner’s article, The REAL History Behind the Polio Vaccine, to see how this belief has no merit, based on historical facts and peer-reviewed studies.
Polio, Guillain-Barré Syndrome, and any other names of disease are simply arbitrary names assigned to groups of symptoms and conditions. The symptoms of polio and GBS are so similar, some people feel that Franklin Delano Roosevelt’s condition was really GBS and not polio (See: Did FDR Have Guillain-Barré?). There were no flu shots in 1921 when FDR contracted polio, but the tuberculosis vaccine was introduced that year.
To understand how vaccine injuries and deaths are all dealt with in a special “vaccine court” that was set up by Congress, after granting legal immunity to pharmaceutical companies in 1986 for any damages caused by vaccines (and which was then upheld by the Supreme Court in 2011), watch the excellent videos below by Emmy Award winning journalist Ben Swann, as well as the video by The Canary Party, narrated by actor Rob Schneider.