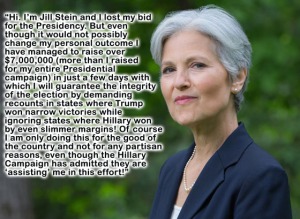 This morning Hillary Clinton’s campaign general counsel, Marc Elias, confirmed what we all knew already, namely that Jill Stein is acting at the direction of the Clintons in her recount efforts in WI, MI and PA.  The discovery came after Elias posted a note to Hillary voters this morning on Medium confirming that they would participate in Stein’s recount efforts even though the Clinton campaign itself had decided against a recount because they had “not uncovered any actionable evidence of hacking or outside attempts to alter the voting technology.”

This confirms, in a round about way, the Stein is the cut out shill for the Clinton Crime family’s continued attempt to steal the Oval Office at any cost.

I fully expect the “recount” to come out in the beast’s favor.

A first in US politics.

Kind of ironic, given the states being recounted used paper ballots

No surprise to anyone, the concession was just another lie, too.