Skip to content
CIA Journalism defenders of pedophilia CIA Pedos and Cucks at NYT
January 27, 2017 uwantson
The NY Times – owned by a Mexican Billionaire and full of pedo apologists and slanderous cucks, was granted a rare phone interview with top Trump advisor Steve Bannon, who in no uncertain terms made it clear that the MSM is chock full of shills who need to get with the program.

Of course, instead of accurately reporting on what Bannon was trying to convey, doing a bit of self-reflection, and acknowledging the overt collusion between the MSM and the DNC/Clinton campaign during the election, the NY Times once again eschewed journalistic integrity and spun Bannon’s words into a divisive hit piece.
First, let me sum up what Bannon was trying to say:

Bannon’s conclusion is summed up in a quote he specifically requested the NY Times run:

Instead of conveying Bannon’s message in context, the NY Times fired up one of their trusty #FakeNews propagandizers and vomited forth a subversive headline, suggesting an attack on freedom of the press:

Big difference. The headline implies silencing the free press, when in fact all Bannon was suggesting is the tone-deaf media got it wrong, they have no idea why they got it wrong, they’re still getting it wrong, and they should consider a more balanced approach instead of spewing lies. That is all. Ironically but not surprisingly, after Bannon calls out the media for partisan hackery and subterfuge, the New York Times crafts an Orwellian out of context headline to suggest they are victims of oppression.
Then the NY Times invokes white supremacy: 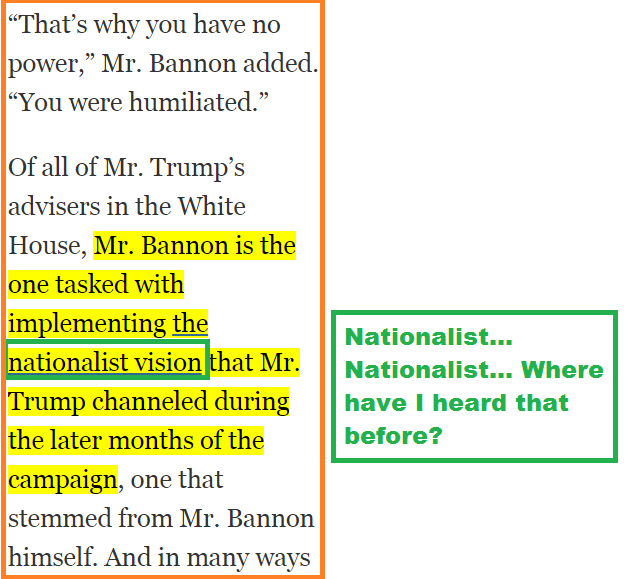 They wouldn’t happen to be riffing off CNN’s headline from 2 short months ago, would they? 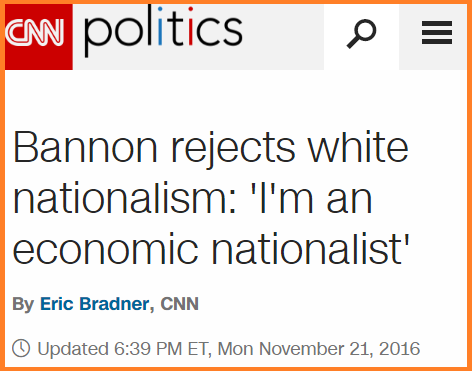 In fact, Google “Bannon Nationalism” and you’ll see all sorts of MSM hit pieces trying to paint the top Trump advisor as some kind of Nazi propagandist (he’s not).
Seeking to malign other members of the conservative press, the NY Times spins Sean Hannity into it’s web of #FakeNews:

If the New York Times, defenders of pedophilia and slanters of truth, refuse to accurately report on something as clear, concise, and honest as what Steve Bannon actually said to them during that phone call, then they are the opposition at a time in which this country so desperately needs to unite and move forward.