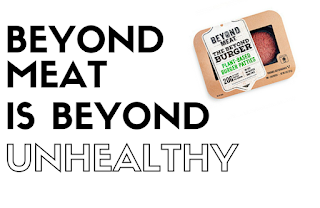 So, you think by buying a Beyond Meat Burger, you’re doing yourself and the environment a favor? Think twice. I took a look at the ingredients and here’s my honest review!

You may have heard about that new Beyond Meat Burger.

This new plant-based burger that tastes and even bleeds like a real burger. If that isn’t enough to weird you out, I don’t know what is.
Weird as it seems to me, I’m much more concerned with the actual ingredients of this beyond meat burger. Especially when the product touts itself as not just healthy, but sustainable.
Is Beyond Meat actually healthy? Is it actually sustainable?

After taking a look at the ingredients, the answer is hell no. Not even close.

There are many ingredients in these products that are both unhealthy and unsustainable.

Processed soy is particularly bad. Whereas fermented, organic soy in small amounts (like natto) does not pose serious health risks, eating soy protein isolate will definitely take its toll on the body.
Some effects of soy include decreased libido, mood swings, depression, and several others.
This study from Harvard found that men consuming the equivalent of one cup of soy milk per day had 50% lower sperm count than men who did not consume soy. That includes even counting other factors like age, caffeine and alcohol intake, etc.

This study found that soy stimulated the growth of estrogen-dependent tumors found in breast cancer. And this one found the same thing.
This study found that,
“…this pilot study indicates that prolonged consumption of soy protein isolate has a stimulatory effect on the premenopausal female breast, characterized by increased secretion of breast fluid, the appearance of hyperplastic epithelial cells, and elevated levels of plasma estradiol. These findings are suggestive of an estrogenic stimulus from the isoflavones genistein and daidzein contained in soy protein isolate.“
Soy is high in phytic acid, also known as phytates. These phytates prevent the absorption of minerals like iron and calcium (among others). This can be particularly harmful, especially for children.
Additionally, soy is high in phytoestrogen (source). This can block normal estrogen, wich leads not just to hormonal imbalance, but even breast cancer.
Note: this is why my periods were so heavy, painful and irregular when I was a vegetarian as a teen.

The processing that soy protein isolate undergoes is also a huge cause for concern.

Dr. Mercola describes the process,
“Soy protein isolate is not something you can make in your own kitchen. Production takes place in industrial factories where a slurry of soy beans is first mixed with an alkaline solution to remove fiber, then precipitated and separated using an acid wash and, finally, neutralized in an alkaline solution.
Acid washing in aluminum tanks leaches high levels of aluminum into the final product. The resultant curds are spray- dried at high temperatures to produce a high-protein powder.”