Skip to content
Uncategorized
June 12, 2020 uwantson A nation filled with lies and hate

Everywhere I look, I see the covens out in force 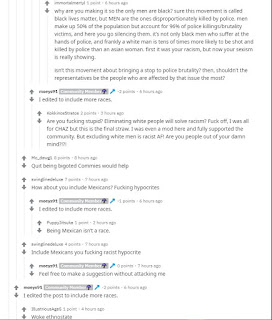 No reason for Trump to save this shithole from its political leaders or its local ANTIFA/BLM.  This School Play put on by the Special Classes (read Retards) who will each get a Participation Award from its Demonrat backers will be handed out by Gov Inslee at an occult (read secret) ceremony in one of the unblown up Tunnels in Seattle.  They will then enjoy Hollywood Rights of torturing small children, sexually molesting them, Spirit Cooking (cannibalism) and for this version of “WhiteHats,” Adrenochrome harvesting.  Tom Hanks has promised he will be there for that sadism ’cause it is his favorite.

IF TRUMP was going to intervene in the satanic Wet Dream CHAOS, The NWO Revolution, it should have been done when he talked about sending in the Military which would mean Martial Law.  Since he did not Nip It In The Bud then, this is now a part of the Disclosures to those continuing to accept The New Normal and WONDERING when will it be over.

And they are brazen about labeling everything the NWO. New World Order. Their endless satanic desire of seeing death, chaos, and slavery as their anti-Christ steps into power. It’s in all the UN, WHO, CDC, Democrat leadership. It’s in the open, in our faces. They are no longer hiding the fact, that these reptilian nephilim freaks want to take over the world openly for Satan.

Can anyone doubt what is really happening here? Can anyone be that blind, ignorant? Only if you are in on it.

DBLet your yes be yes and your no be NO

See what happens when you defy the God-King Raz!


A lesbian Seattle Councilwoman says the six-block, warlord-controlled ‘Capitol Hill Autonomous Zone’ (CHAZ) should permanently remain in the hands of the public, according to Komo News.

Councilwoman Kshama Sawant, who embedded herself in the front lines of Seattle’s BLM protests over George Floyd’s death – a black man who died after a Minneapolis cop knelt on his neck for nearly nine minutes  – says she plans to introduce legislation which would officially convert the neighborhood into a ‘community center for restorative justice.

Our movement needs to urgently ensure East Precinct is not handed back to police, but is turned over permanently into community control.

My office is bringing legislation to convert East Precinct into a community center for restorative justice. https://t.co/YGSOG0MXU3

As to the head “purist” revolutionary, Kshama Sawant, you might find this interesting.
https://mynorthwest.com/970342/dori-kshama-sawant-tax-filings-con-artist/
Like smart commies always and everywhere, she’s in it for the $$$.

On Tuesday evening, Sawant opened the doors to City Hall, allowing over a thousand protesters inside who loudly demanded that Seattle defund the police department and ban the use of chemicals such as tear gas. The protesters also called for the immediate resignation of Mayor Jenny Durkan.

Of course, the witches, in black, assembled and began chanting in the halls, celebrating their victory.

The Seattle PD are currently working to broker a deal with protesters, who have controlled CHAZ since Tuesday after clashing with police over the weekend – resulting in the evacuation of a police precinct and a National Guard pullout.

In less than a week, Seattle Police Chief Carmen Best says crime has already spiked 300%, and that “Rapes, robberies and all sorts of violent acts have been occurring in the area and we’re not able to get to [them].”

Seattle Police Chief: “Rapes, robberies and all sorts of violent acts have been occurring in the area and we’re not able to get to [them].” #capitolhillautonomouszone #antifa #BlackLivesMatter pic.twitter.com/Oe5YfVz3uL

Meanwhile, homeless people ended up stealing the food brought in to support the hungry protesters, and “heavily armed” soundcloud rapper (and AirBnB superhost) Raz Simone has taken over as the autonomous zone’s resident warlord with his crew.

Not everyone’s a fan of Kshama’s plan…

I’ve always been your supporter, but this is insane and criminal. No one has elected those people. This is a coup done by thugs who created anarchy and chaos and who are now terrorizing many people who live there.

Why don’t you offer up you’re $900,00 house in Leschi as a community center since you care about the “movement” so much.

Hijacking BLM for your own agenda

Can you imagine the MSM reaction if this was conservatives taking over a giant section of a major US city?

We’re sure they’ll work it out.

I don’t want this to ever end. https://t.co/iquBXPjVHo

Seattle Mayor says, about the anarchists takeover of her city, “it is a Summer of Love”. These Liberal Dems don’t have a clue. The terrorists burn and pillage our cities, and they think it is just wonderful, even the death. Must end this Seattle takeover now!


America now has no-go zones where fire, rubbish collection and emergency personnel cannot go without military escort.
Now we are just like Europe! This is great. Makes me proud.
Let’s go ask Europe how that is working out for them.
* * *
Kshama Sawant fled India and then tries to destroy the US with her radical leftist ideology?
Revoke her citizenship and deport her back to India!

Kshama Sawant (/ʃʌmɑː sɑːˈwʌnt/; born October 17, 1973) is an American politician and economist who serves on the Seattle City Council. She is a member of Socialist Alternative. A former software engineer, Sawant became an economics instructor in Seattle after immigrating to the United States from her native India. She ran unsuccessfully for the Washington House of Representatives before winning her seat on the Seattle City Council. She was the first socialist to be put into power by the satanists, a citywide election in Seattle since Anna Louise Strong was elected to the school board in 1916.
* * *